I've recently taken up the hobby/game/interest/waste-of-time/pursuit(?) of geocaching. So how did this happen? Yet another thing to occupy my already endangered spare time? In hindsight, it seems only natural. It involves technology, being out in the woods, conservationism, exploration, and a childlike sense of wonder. What's truly a wonder is that I didn't stumble into this sooner.  But in my case, it took a nudge from my son and a conversation with my wife to get me off my duff to try it. My son got a treasure map from one of his friend. His father had given him a treasure map a couple of years ago, which led him to a treasure box on their property that was just chock full of gems and doubloons. Liam and his cousin were bouncing off the walls one Saturday about this map, because, you see, the map was BIGGER than just his friend's yard. It also showed areas all the way down to Florida . . and there were other treasures on it! We just about had to tackle them as they were headed out to hitchhike to the Sunshine State. (Not really, they're nine. But I wouldn't have put it past them if they had gotten any more worked up about that map.)

My wife and I were talking about how fun it was to see Liam and Aidan so excited. I said something about how there's nothing better in the world than that sense of wonder you have as a child. And then my wife said those fateful words, "You know, we could take them geocaching or something, so they can at least find something."  One of our former neighbors had been into this hippy-thing called 'geocaching' and was always going on and on about it. That came to mind, so I looked into it. And a giant, bemusing, out-of-control slippery slope opened up under me and down I went . . . like Michael Douglas and Kathleen Turner in 'Romancing the Stone'.

What is geocaching? Basically, it's a glorified global scavenger hunt, using any GPS-enabled device to guide you. It was started about fifteen years ago by a couple of people in Oregon (naturally) who were into GPS and exploring the natural world. It has now evolved into a global passion followed by millions of people in search of more than 2.6 million individual secret stashes of stuff. Mostly the stuff doesn't matter, it's the hunt that matters. The game is to log into one of the two or three cache tracking websites, find one in the area where you will be travelling, use your iPhone or Garmen to track it down, FIND IT (not always a simple taask), open it, trade stuff for stuff, sign the logbook, put it back where you found it (hopefully hidden even better than when you found it), and finally log your find online. To get the most out of it, you have to pick one of the geocaching communities. There is an Open Caching site and movement, mostly pushed by the GPS maker Garmin, which is sort of like the wild west of geocaching. But 99% of all geocachers use the ones that started it all: Geocaching.com, which is run out of Portland, Oregon by several of the originators of the activity, with their company Groundspeak, Inc. But all of the things you need are at Geocaching.com.

I'm just a baby at this. My score is only 6. That means I've located 6 geocaches, all in my local area, all within the last two weeks. There seem to be thousands in the Atlanta area alone. Heck, I found one less than 1000 feet from our house, and another less than 500 feet from my office. The fun of it is that once you get within about 50 feet of a cache, GPS isn't going to help you much. It isn't that precise . . . and frankly, lots of the people who create these caches are just evil. They go out of their way to make it hard to find them. (Don't get me wrong, most of them aren't that hard. Many of them are obvious once you get nearby. It depends on what the cacher is going for . . . a tricky, clever hide, or just to get you to a beautiful spot out in nature.) 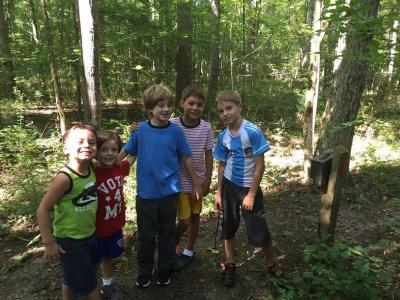 Last Sunday, I conned all five boys, our two plus their three cousins, to walk down our street and across Riverside Drive where there is a big wooded 'park'. It's sort of attached to the Roswell Community park system, but not really. It's just a low lying area near the Chattahoochie River. They looked like the cast of Stand By Me. And we went hunting for three geocaches I found on the Geocaching iPhone app. We found two, couldn't find the other. The last one was truly out in the woods, and it was getting kind of late, and the boys were freaking out because . . .well, there's lots of spiders in the woods in Georgia. hee hee hee.

But finding them, especially when their hiding spot is tricky or clever, is just a joy to experience. It's especially fun to see kids come upon a location and run around looking for the cache. And then when you open the cache, you get to see them pour over the contents. Usually, as long as it hasn't been muggled, there a logbook, a pen that probably doesn't work (take your own at all times, that seems to be the rule), some swag, maybe a couple of geotagged items, and very rarely, some real treasure.

I have to admit that I'm doing this at least partially as an experience for my boys . . . but to be honest I have to admit that it's also a blast for me. My wife says she hasn't seen me this excited about anything in a long while.  So what's next? Well, I'm going to go out and find a ton more caches, logging them all and hopefully finding a few travel bugs. Adri and I are going to Italy next month and I can't wait to take along a few trackables to a new continent! 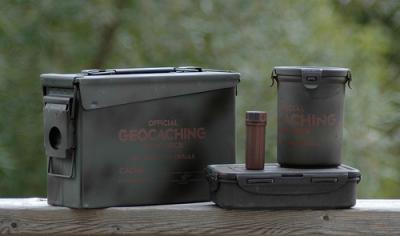 And then, of course, there's the create of my own caches. I'm taking this seriously, even if it is fun. They recommend that you don't try to create your own cache until you've found at least 15 or 20, so you know what the do's and don'ts are of this activity. I've already gotten some hints about it:

I think I'm going to be doing this for years to come. It gives us an excuse to get out and see places and things in the world we wouldn't have seen otherwise, and it's always good to be out among the trees. I plan to place caches both here in Georgia and up in Ohio where I was born. And maybe I'll use woodworking to create some treasures of my own to place out in the Cache-o-sphere and see where they go. It sounds fabulous.