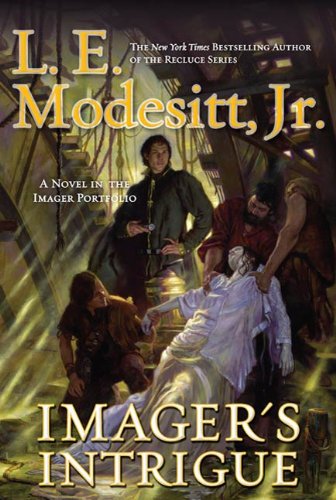 I actually like reading L.E. Modesitt, but he can be somewhat infuriating at times. Imager's Intrigue, the third book in his Imager's trilogy, is typical. This, unlike much fantasy fiction is not intended for a 13 year old audience. At times I get the feeling that he's only concerned about the plot as a secondary outcome. Honestly, I suspect that he uses these novels as a way to role-play some of his ideas about economics and political theory. I think perhaps the fact that he fits his fantastical and otherworldly elements into such a mundane setting is what makes the story interesting for an adult. As always, the magic available to the characters has rules, very real limits, and often difficult consequences.If you've read the first two books, you do want to find out what happens to the protagonist, Rhennthyl, and his wife Seliora. They are interesting, consistent characters, if they do suffer sometimes at the hands of Modesitt's style. As usual, the author keeps a hard remove from his character's emotions. He describes their actions and some of their thoughts, but he only lets us infer their motives and emotions. In some ways, this is what makes this a more adult version of the genre. It isn't an emotional rollercoaster, it is a story about events. It reads almost as a historical document.