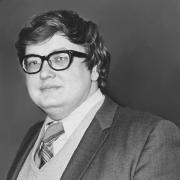 As I've seen similarly reported by many people this past week, the death of Roger Ebert hit harder than I expected it would, especially considering everyone knew that he hadn't been well in recent years. The outpouring of remembrances and testimonials is impressive, and most heartfelt, it seems to me.  Since Roger was the consumate newspaperman, I've kind of made it a hobby of judging various journalistic organizations by how they handled this story. NBCnews.com and the New York Times did it with skill and care. CNN and CBS seemed a bit sloppier. I didn't even bother to read the NY Post, Washington Post, ABC News, and Fox News, which kind of says how far they've fallen (at least in my own estimation.)

The personal writings about him have been even more impressive, as they can be on occasions such as this, since they don't need to hold to some journalistic standard when it was a friend and a colleague they lost. James Berardinelli, Andy Ihnatko, and Leonard Maltin, in particular, wrote very well about him. The loss was felt keenly by many.   What sort of surprised me was that the loss was felt keenly, also, by me.

Reading over stories and obituaries, many reported the same themes: Roger Ebert was a very hard working newspaperman, who absolutely love, love, loved his topic.  Roger Ebert wrote about the movies the same way that a gormand writes about the favorite meal they've ever had in their lifetime, or the way that Peter Gammons or Terry Pluto write about sports in their home towns.  There's love and passion and an expectation that the people using the medium will be held to the standard of not what they have done with it, but what it has the capability of doing.  They write about how positive Roger was throughout his whole life, even late in it when he was facing incredible health-related hardships. And they write about what a good friend he was . . .always eager to introduce good friends to one another with emphatic introductions that highlighted the best in each person.

All of those things are wonderful and, it seems, true facts about this man. I feel the need to write something about him, but what can I add? I wasn't a newspaperman, or even a journalist. I've never really written about film. I didn't know him personally. I'm sure some of it is, as has been mentioned, the fact that he wrote reviews in a personal style, sharing some of the motivations of why he reacted to a particular film in a particular way. Because of that style, you natuarally felt like you knew him. I'm sure that this is part of it, but there's something else I want to bring to the topic, what that first show back in the 70's meant to me, and I suspect, to others.

I think Sneak Previews, as it was in 1978, was a fundamentally important thing in my life. The death of Gene Siskel, back in 1999, hit me almost as hard as this.  And despite what Roger Ebert said over the past 14 years, sometimes, I'm pretty sure, they didn't even like each other one iota.  So what was it about that little movie review program in the 70s and 80s that made it so influential?  Others have said that it was the first of its kind, and the fact that it brought movie reviews to all of America at a time when very few people knew more than a Thursday ahead of the opening when a new movie was going to arrive in the local theater. Those facts are undeniably true. But the more important trait it had, at least for me, an Ohio farm boy growing up in the world before the Internet, the VCR, or the cineplex, was a bigger vista.

When he went back to review 'the great movies', Ebert wrote this about The Wizard of Oz:

..the elements in ``The Wizard of Oz'' powerfully fill a void that exists inside many children. For kids of a certain age, home is everything, the center of the world. But over the rainbow, dimly guessed at, is the wide earth, fascinating and terrifying. There is a deep fundamental fear that events might conspire to transport the child from the safety of home and strand him far away in a strange land. And what would he hope to find there? Why, new friends, to advise and protect him.

In a small town in Ohio in the 1970s, the movie palaces had already failed or were crumbling and barely used. There might be a new mall on the edge of the town with 4 or (gasp) 6 whole screens showing films, but all of them in dingy little rooms, poorly lit. There was, as I said, no Internet yet. Big city newspapers, even, where far away and almost impossible to read except as microfiche, two years past, in the local library reading room.  And television? It was three network channels (six if you were lucky enough to live just on the line between major markets and could pull in from both . . .but were just as likely to pull in only 2 from one and none from the other because they were both too far away) . . . and maybe a  PBS station.  The PBS stations of that era saved us, the creative,  thoughtful kids in the back country.  Only there could you see masterpiece theater and Nova (Cosmos!) and, yes, Sneak Previews.

When I first saw Sneak Previews, it was probably a year out from expanding nationally from whatever local program it had been in Chicago, so Roger and Gene were still very real and rough around the edges. They gave honest opinions, and they showed really cool clips of films that, not only had I never seen, but given the local theater situation, likely would never even have heard of, without these Sneak Previews guys telling me about it.  I liked that they argued about the movies, because it was obvious that art isn't something that *should* breed complete consensus. It's supposed to make you think, and make you come up with your own take on things. I loved the world it presented, a world  out there, only dimly guessed at by a young kid in Ohio. Whether it was a bushman in the Kalihari finding a Coke bottle, or a playwright in New York having a long, weird conversation with an old friend. . . the things they showed me were fundamentally altering to my worldview. Even if I never (or only MUCH later) got to see the films . . . the topics they mentioned and the scenes they showed all across the country in the late 70s were like the newsreal films of an earlier era.  It was a far away, strange land, but I was guided through it by two new friends, Gene and Roger.

I loved the fact that Roger Ebert recovered from the loss of his bickering partner when Siskel died, and continued to do what he always did, write about, talk about, and promote good movies. And I loved the fact that he didn't let the cancer stop him. He provided a model of what you do if you have a passion. Just because you can't talk anymore doesn't mean you give up your life's work of telling people about great things you've discovered. It just means you find a new way to tell them.  The fact that he did it primarily in that major vehicle of 20th century media, the big city newspaper, made his work that much cooler. Even if that medium is fading now, we should still honor the men and women who worked their entire lives in it.

In some ways, with his humanism, his optimism, his passion for art from the perspective of the common American, his professional ethics, and his tremendous ability to work hard, I see Roger Ebert as something more than just a beloved movie critic. Roger Ebert was perhaps one of the last of the true 20th century Americans.  He adapted well to the 21st century, with its Twitter and its rice cookers, but that was only because the great things of the last century couldn't survive into a new era. Roger Ebert survived as a testament to the great work and world view of the 20th century.  And he will be missed in more ways than one.