About a week ago (it takes me a while to get these updates posted sometimes), I finally took a deep breath, and took the plunge. I started gluing together the case of the jewelry cabinet. I've posted photos here of the dry fitted case, but I took it apart last month and started sanding everything. I got all of the parts into a state that satisfied me, or at least I realized I was never going to get this done if I kept dawdling. 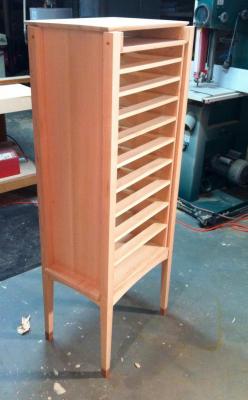 The glue-up went mostly as planned, with one hiccup. I had thought of pinning the top of each leg to the case wall using through cherry pins, but I realized that I needed more strength than that in the joint. So switched to drilling screw holes and screwing the tops of each leg to the case. In the front, the front legs only overlap the case by about 3/4", so the alignment needs to be pretty good. I missed.  One of the screws I thought i was screwing into the case, actually stuck out a bit on the front of the case. And unfortunately, I didn't see this until after the glue was dry.  So that one corner has no screw. The glue will need to hold instead.  The hole from the screw is very small and shouldn't be hard to repair. And it will also eventually be covered by the front doors of the cabinet.

This was also the second time I used my Lie-Nielsen dowell plate to cut the dowels for a real project. It worked pretty well, although I have to say that I now realize that the 'straight-grained lumber' is pretty much the most important aspect of the source material for dowels. I had no truly straight grained cherry, so I used what I had. Luckily, since I wasn't creating 3" long through dowels, I just needed short pieces to fill the screw holes. That worked well. And it also was very important to create blanks that were only 2 or 3 inches long at most, to drive through the plate. And I also chambered the edges of the 3/8" square dowel blanks before driving them through the plate. Keeping square corners was too much force, and the dowel blanks ended up breaking. But once I had the process dialed in, the dowells that resulted were very nice.

After the case assembly had dried for a day, I then glued in the web frame; gluing only the front quarter, and then the back piece of each frame. This will allow the rear mortise joint to slide, allowing the web frame to stay in place even as the case assembly expands and contracts fore and aft as the humidity changes with the seasons.  This case is truly the first time I've built with wood expansion in mind the whole way through the design process.  (In the past, I've either built with plywood, or with small enough glue surfaces that such cross-grain connections aren't really an issue.

Up next, I need to sand off some of the extra glue I got on the case assembly. (I tried very hard to glue sparingly, and smartly, with glue going into recesses, and into reservoirs of space. But I didn't want to make the case weak by under-gluing either, so I had some squeeze out here and there.

After that, I'm going to work on the drawers. Originally, I planned to make the drawer joints be simple rabbet joints. But the rest of the piece is turning out so nicely, I really have to do dovetails on the drawers. This'll be fun. I've been wanting to practice my hand-cut dovetails again.