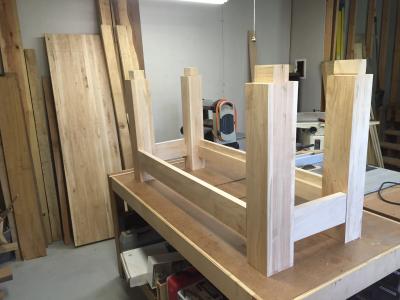 After a great pile of drilling, followed by a whole passle of chisel-poundin', I've managed to fit all eight stretcher tenons to mortises in the workbench legs. This is the quickest work on this project yet. The boys are 9 and 4 1/2 now, so I'm finally able to grab a half an hour here and there to sneak down to the basement and get some work done. (As long as I balance it with other fatherly duties.)

Next up, I set aside one four inch wide strip of silver maple to serve as the front edge of the workbench top. I had originally intended to carve a message into it, but the more I think of it, the more I want that edge smooth and unblemished for better work-holding. I think I may, though, carve the message into the front of the leg vice. I'll have to see what looks right. I think I'll still stick with my original message, from 'Two Tramps in Mud Time' by Robert Frost

"My goal in life is to unite, my vocation and my avocation, as my two eyes make one in sight"

Which, now that I think of it, is odd . . . since I have no intention of quiting my day-job to take up woodworking full-time. Hmm. I guess it's a spiritual goal or something. But I am constant in my artistic pretentions, five years and counting and my motto hasn't changed. I'm not sure if that's admirable or pitiful.

The fit of the mortises is pretty good, although it does take some pounding to get it all together.

So, after I glue the extra piece on the front of the benchtop, I'll position it on the legs, mark for the benchtop mortises and after much huffing and puffing to move everything around, drill and chisel out those.  Unlike most of the other recent Roubo's I've seen, I have no intention of creating through mortises for the benchtop. I'll pin and glue the legs to the top. Maybe I'll get this project done before I have to move the shop again in May or June.