I haven't posted much on the site the last four months. In late May, we were still under the impression that we were going to be buying a house here in Roswell and moving into it in early June. But then the fucked over banking system in the U.S. stepped in and told us,

"Nope, you aren't allowed to get a house. Yeah, we know your credit is fine and you've both got great jobs and all, and your kids are in the local schools, but, you see . . . a couple years back . . . you remember when we tanked the global economy?  Yeah, funny thing . . . you know how when we did that, your former employer laid you off, and the home you bought in Florida for a reasonable price back before we engineered that housing price bubble? Well, since you had to move to Atlanta to find work, and you ended up not being able to find a buyer. (No . . no, you're right, we weren't loaning money to ANYBODY then to buy a house . . . bygones.) Right. That time. Well, see, we won't loan to anybody if they have a short sale on the books for at least two years. Well, honestly, most of us say three years, but a few might do it in two.  Honestly, Mr. Oyster, I really don't see the need for such language!  Well, I never! Sir, you must calm down!  What are you doing with that file?  What the heck is a rasp?! No, you are not sticking that anywhere!  No, really . . . I think I'll be leaving.  NO. Stay back! AAAUGGGGGGHHHHHHHHH!" 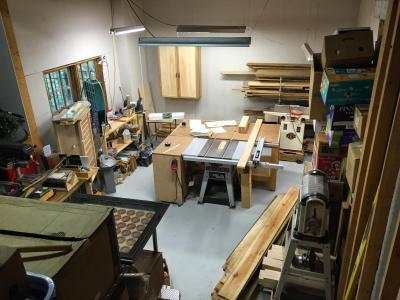 Yeah. So we're in another rental property for at least another year.  We scrambled to find a house in the same school district, so it wasn't a long distance move. But still, I had to move my whole shop. It's taken me three months just to get started putting everything back together. After about 3 weeks of work, I finally have the basics of a shop again.  It's cramped, because the new house has the garage in the basement, so about half as much storage space. AND, since we're probably going to have to move again in 9 months, I don't have the energy to try to set things up in any permanent fashion. So here we are. The basement is a split level, with the shop floor down a flight of stairs from the garage. This is a shot looking down from the basement garage level into the shop. The best part of the new place? The house is on a steep hill, so this 'two floors down' basement has a great view out into the wooded back yard. The worst part? The shop floor is basically 30 feet below street level. There is no way I'm going to try to move my chop saw station and band saw down there, only to have to drag it back up that hill in less than a year.

More photos of the new shop

Things are a bit cramped, what with tons of boxes piled in all the corners, a severely trimmed down collection of wood, and winter coming shortly, still, it's a place to get some work done. You can probably see the jewelry cabinet I've been building for my wife in a couple of the shots. But right now, I'm back to trying to finish my workbench. The top is leaning up against the wall, and I'm squaring and dimensioning the laminated legs now. And I'm finally pulling out the parts to build the whole undercarriage of this thing. It's a bit tricky since I now have my Benchcrafted wagon vice and need to figure out how to fit it into the design.