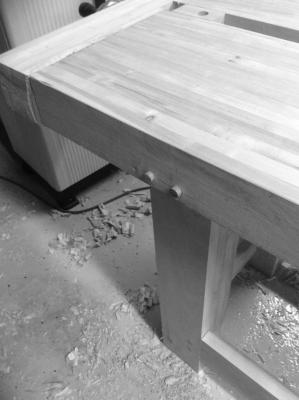 Here's a note on those auger bits. They are nominally the size stated, but  . . . they really hog out the wood and try to rip your arm off if your using a strong drill. All of that's good. What's not so good is that they rush through and the resulting hole ends up being a bit of a mess. And that mess is not really 3/8" wide.  I went up and down in the hole with the auger bit (since it's the only thing I have that's long enough to reach the full depth. But once cut, that hole really doesn't get much wider than that first pass.

So this meant when driving the pegs, they got stuck just past the depth of the forstner-bit drilled hole.   Out came my trusty LN block plane, and I planed down each of the dowels so it would drive all the way to the bottom of each hole.    (No, I didn't have green wood pegs a la Christopher Schwartz, and anyway, doing that with offset drill holes in the legs for a drawbore effect . . . that would have involved me separating the legs from the top again. See paragraph 1 above for why *that* wasn't going to happen. So hard, dry pegs, slightly tapered by a block plane. A little glue, and then drving them home. Boy, that was a satisfying feeling!

Then with the little Stanley flush-cut saw, I trimmed the pegs to sit flush with the bench face. A couple of passes with the block plane, and it's done.

No, I'm never going to break down this bench when moving it, but I'd like an honest answer from those who have built their's to be taken apart. How many times have you actually done it?

Yeah, I thought not.