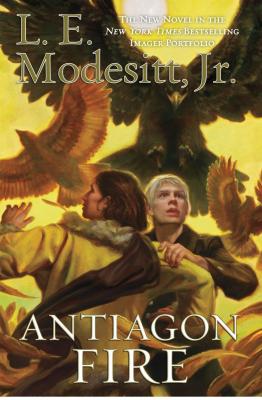 Antiagon Fire is the fourth book in L.E.Modesitt's second Imager series. The first series,a trilogy composed of Imager, Imager's Challenge, and Imager's Intrigue were set in a location that is very reminiscent of 1890s Paris. The second series, Scholar, Princeps, Imager's Batallion, Antiagon Fire, and the final book in the second series, Rex Regis, are set many hundreds of years earlier in the same world. If I had to guess at a parallel date, I'd guess at around 1500CE for this second series, since they have cannon, but individual firearms ('muskets') are still rare. But the defining feature of Modesitt's world here is the fact that 'imaging' exists. Imaging is the ability of some rare individuals to call into existence things with their thoughts. As with all Modesitt magic, its use has real and hard limits. The point of the books is almost certainly one of exploring how intangible power such as imaging would impact the politics, government, power struggles, warfare, and personal interactions of a society. By throwing this fantastical element into a world very similar to our own in most other aspects, the author provides a very telling study of human nature and the way that our social structures actually function.Occasionally, Modesitt's desire to study the effects of his scenario can tend to overwhelm the human story at the center. Both Imager series, on the other hand, have done a pretty fair job of balancing the story with the intellectual introspection by the author. This second series, in particular, and most particularly in this latest book, has done a very good job of providing main characters that you can care about. Quaeryt, the protagonist of the entire second Imager series, has reached a point in his personal and status growth where his long-term goals are become more and more focused. The results of these plans are also becoming more concrete, often in ways that are devastating to everyone who stands in his way. Quaeryt's wife Vaelora here becomes an even more important and evolving character. As usual, the author can write very smart, compelling female characters, which is sometimes not the case in other fantasy fiction.

The leader that Quaeryt follows, Lord Bhayar, also becomes more complex in this novel. You can see through subtle conversational interactions and byplay, that the stresses and machinations of ruling a country are not often fun, even for the king. And the interactions between Quaeryt and Bhayar, as Quaeryt's plans and power become more and more apparent, are fascinating. They need each other, and they do genuinely see each other as friends, but neither can ever ignore the fact that politics and their individual goals and roles will never let them become truly unguarded or trusting with one another. Many of the supporting characters of the series, save only for Quearyt's friend and military comrade Submarshal Skarpa, here sort of fade into the background. This seems appropriate, as the tale, told from the perspective of the ever more powerful, and hence, isolated main character, must focus more on Quaeryt and those in high power places.In this book, we've moved well past the typical Modesitt coming-of-age/coming-of-power story, to a place where the actions of the individual can be truly world-changing, and truly terrible. This prequel perfectly sets up and explains how the somewhat utopian reality of the first Imager series could have come about. Unlike the Star Wars prequels, which struggled and groaned under the weight of shoe-horning in all of the facts to explain the later films, these prequels show in a natural, one-act-follows-another manner, just how the later world came to be. Sure, it's taken an individual with almost god-like powers, and his iron-willed determination to create the future he envisions, but given his reality, you can understand every step of the way why he feels his actions are necessary.I really enjoyed this book and am really looking forward to the final book in this series. The one down side of it is that, as usual, the author has a bit of trouble pacing the denouement. After the climactic events, and a rush to the finish, it ends abruptly. I don't think it's entirely wrong for the story, but with such a massive story with massive momentum, the sudden finish feels a bit violent. Hopefully, Rex Regis will provide an epilogue, at least, to give us more emotional payoff after the final large events (rather like the 'several' endings of the Lord of the Rings books and movies.) A large story requires careful handling so as not to undue the emotional impact you've created in the previous 500 or 1000 pages. Since there's one book to go, hopefully we'll get that gentle landing in the next book.