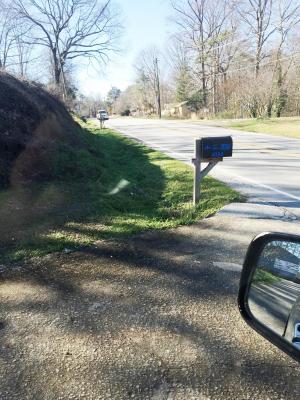 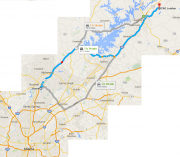 The drive up was a pleasant one on a sunny Saturday morning, into what are effectively the foot-hills of the Blue Ridge.  It took about an hour and 15 minutes. CAGLumber is on the far side of Gainesville from Atlanta, so I drove through the city to get to the Old Cornelia Highway. Gainesville is bigger than I thought it would be, with a nice cosmopolitan center and a nice, fancy new hospital. The roadway is the typical rolling, winding affair you expect in this part Georgia, and the address comes up on the right as you go over a hill as you head away from Gainesville. Finding the lumber yard was a bit tricky, since their street presence is non-existent. I drove past it twice before I picked out the address on the mailbox.

Driving up the hill,

past the house on the left,

you come to what looks like a repurposed farm building with an office in the front. There were several pickup trucks around it today, indicating I wasn't the only one out today looking for lumber on a nice weekend day. Picking a spot in the muddy parking area, you can see that this is a busy, working mill of a lumber yard. There were logs stacked all around, presumably for future milling.

Near the office door, I ran into a large man. This was Stephen, the man I had spoken to on the phone. As soon as I explained what I was looking for, he said, "Oh sure, here, let me take you back to where the sycamore and maple are stacked."  We walked around to the back of the main building, past numerous storage sheds stacked floor to ceiling with drying lumber. He pointed me to a rack of white wood and told me to pick out what I needed. He turned to help another customer. A father and son had also come in right after me. The father was clearly helping his teenaged son with their first big project. They were looking for some oak for a boatbuilding project. I listened as Stephen very patiently explained the material options, flatsawn, quartersaw, etc. and how pricing was handled in boardfeet. He told them to go ahead and back their truck around, load up what they wanted, and they'd measure the haul up near the office. 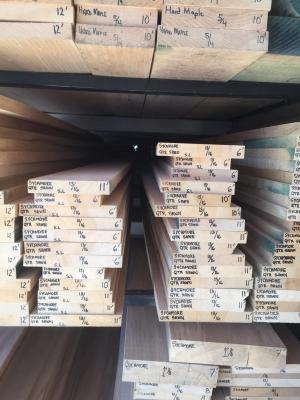 Meanwhile, I was picking through the sycamore selection, very pleased with the clear labeling and the good quality.  As anyone who has built with quarter-sawn lumber knows, committing a project to quartersawn is an invitation to higher costs. Finding clear, long lumber that is wide enough for your project parts is always a challenge with quarter-sawn, but particularly so with sycamore. Unlike most other species, the desirable quarter sawn sycamore is the creamy white sapwood, which is often no more than 2 or 3 inches thick around the outside of the log. It often takes many glue-ups to create larger panels, which was certainly the case with my jewelry cabinet project. Luckily today, though, I just needed long 2 to 3 inch wide pieces for door frames. I was like a kid in a candy store to see three whole shelves all clearly labeled on the endgrain, 'Sycamore Qtr Swn' with the official price thickness, and very usefully, the board's length. Clearly this Stephen is an orderly sort.

I also found, in another rack nearby, a nice six foot long piece of hard maple, at least 20 inches wide and a full 12/4 in thickness; perfect out of which to cut my leg vice for the workbench project. Above that was a full stack of large, wide boards in ambrosia maple. Nice.

I hauled my six or seven boards up to the front of the building and found Stephen. (It wasn't worth backing my minivan back to the shed. I needed the exercise anyway.) He just plopped my boards on top of a stack of lumber sitting in front of the office and pulled out a tape measure. It was a simple calculation, length, width, and listed thickness, divided by 144 and multipled by the price. I paid $7.50 per board foot for the sycamore. (It would have been only $3 for the non-quarter-sawn stuff. Remember what I said about committing to a quarter-sawn project.) And I think the Maple was $3.50 per board foot. But with such a thick piece, it was a bit 'ouch'. But hey, that's what thick lumber costs. Stephen did add a small surcharge when I said I wanted to pay with a credit card. As with most small lumber places, I think they do really prefer cash or check. Their office is a rabbit warren of a room, piled high with papers and second hand office furniture. He very casually mentioned that he's having to do most of this stuff himself now, since the woman he had had working for him, had . . . what was the phrase he used?  Oh yeah, "She and her boyfriend evidently decided that this was their business, not mine. That cost me quite a bit, I'll tell you, until I figured it out."

He also handed me a business card he'd had printed on oak veneer.  I asked if I could get a couple of the boards cut down a bit. They were too long to fit in the van. He said "Sure, no problem." He had a guy who I wasn't sure until this point if he was a customer or worked there come over and help me out. We went back to their saw shop and he very nicely cut my two 12' boards in half. I saw they also had what looked like a 12" jointer and possibly a 36" (?) planer.

As I stood chatting a bit with Stephen after the sale, I casually mentioned that I like the larger width stuff he seemed to have in stock, because I had promised my wife that eventually I'd build her a live-edged slab dining room table. At that, Stephen's eyes lit up and he said, 'You've gotta see some of this stuff I've got. Yeah, we've got lots of slab stuff." I then got to see some amazing material . . . and I realized that this place is much more than I thought it was at first. I just thought this was a small regional supplier of lumber, but it seems to me that they want to go the direction of someone like Hearne Hardwoods. He clearly has been bidding on rare logs, and he's clearly able to handle very large material.  All of those side buildings with drying lumber? Full of full filches and slab cut logs, air-drying slowly. (They do have a home made kiln for drying small lots as well. I saw it in their saw shop.)

He has a whole store room set aside for what he calls 'Executive conference table slabs'. I have to say, that's probably what most of them will go for. Giant 12' long pieces of live edge exotics from South America. A 3" thick 30" wide slab, of what I was astonished to see was . . .Butternut. I couldn't believe it. You almost can't find that stuff in regular sizes and here he has a giant slab of it, clean, uncracked, blemish-free. 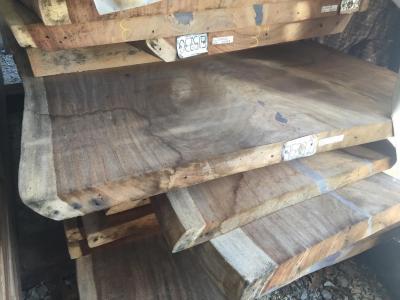 He mentioned he bid on a log that had been found in a swamp somewhere. I think I was too astonished to snap a photo of it. I suppose that makes it like one of those fish that got away. Still I did take a couple of shots of the slabs air drying in the shed.  I told Stephen that I'd likely be back later in the year, after we've bought our house.

I'll have to save up for that one. Each of the larger slabs, particularly in the very figured woods had prices listed. Not for the faint of heart, but you get what you pay for, I guess. There were some nice pieces of Walnut and Elm that were less pricy . . . in the $800-$1500 range. I'll need to buy a truck or something first, as well. Maybe the slab table will need to wait a year or two. :-)

Overall, I was pleased with the experience of going to CAG. It seems to be basically a one-man operation, with a couple of helpers. If they can get past what were evidently a chaotic recent past, and get their marketing fixed, (and maybe put up a sign on the street) they may become some thing much more than a small regional supplier to local woodworkers and subcontractors. Their prices are fair . . . not cheap, but reasonable. Their selection is amazing, especially considering the place is only about an hour from my house.