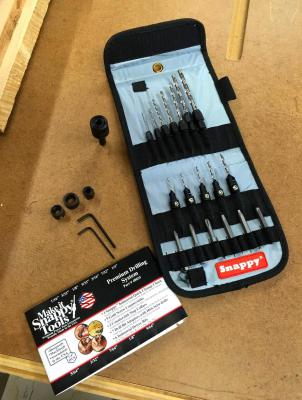 Review of the Snappy 25 Piece Countersink Drill and Driver Set as purchased from WoodCraft. Reviewed on December 28th, 2015.

One of my wife's Christmas gifts to me this year was this Snappy 25 Piece drill bit set. Originally, I had put the Rockler 10 piece (approximately) countersink set on an Amazon wish list, but when she talked to the local Rockler, they were amazed at the price listed on my wish list, which had been something like $30, and they said they were all sold out, "Not surprising, really, at that price." And Rockler didn't have anything that matched that in stock, so she went to the Alpharetta WoodCraft. They pointed her to the Snappy set.

Woodcraft lists this set on their website at $80. It is 100% American made and assembled, and my wife knows I am willing to pay a premium to support American manufacturers, so she got it. She tells me she got a much better price than that in the week before Christmas. With only a couple of fairly minor nitpics, I really like this set and decided I should formally review it so others might decide to get it as well. I feel it is worth the money.

What you get -- In the plastic packaging, you get a set of five counter-sink drill bits in the standard American sizes, two countersink stop collars, seven drill bits in 1/4" hex shank adapters, six driver bits, a couple of allen wrenches, a nylon carrying case, and best of all a Snappy 1/4" hex quick change chuck. Overall, the set seems to be machined very well. All of the pieces have a good heft to them, especially the chuck. 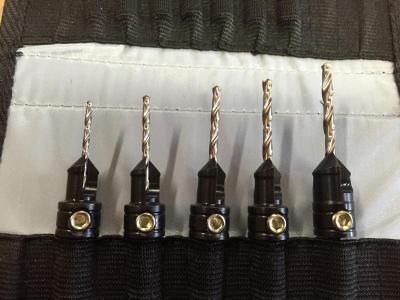 Countersinks -- These have replaceable bits, which is critical since I've gotten parts in the past where the drill bit was evidently welded to the countersink, rendering it useless when the bit inevitable breaks.  The bits are straight, not tapered. I specifically did not want tapered bits. I find such 'fit the screw' drilling to be entirely too precious, and here's the rub, too fiddly. With a tapered bit, you have to get the right screw to match the right taper and then you have to get the depth precisely correct. Just let me drill a friggen' hole! The snappy countersinks seem a bit more solid than previous ones I've used.  (Flimsy countersinks tend to bow out a bit, creating a gap between the drill bit and the countersink cutter, especially after replacing the bit a couple of times. These seem a bit more sturdy, so maybe they won't do that.

Drill bits with hex adapters -- The bits are sharp and seem durable on a couple of test uses. The true value here are the standard sized bit adapters. They should work well with my Lee Valley bulk ordered HSS twist drill bits, when and if the included bits bite the dust. These hex shanks, when paired with the chuck make drilling a bunch of holes just a joy.

Stop collars -- I've seen some online complaints that the collars didn't fit some of the bits, but I don't see any problem with mine. I only did a quick test install, but they seem to hold and grip fine. 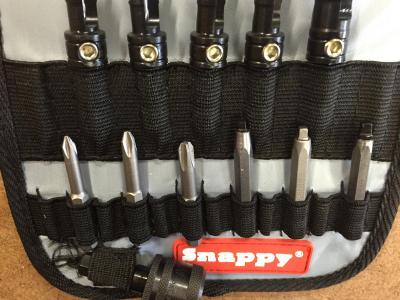 Driver Bits -- These kinds of thing are a dime a dozen, however I will say that I like the extra long length of these. Time will tell how durable the tips are, especially the three Philips. I don't typically use square hole screws, but I guess I have them if I do want to use them.

Quick Change Chuck -- As I mentioned above, using this thing makes the whole set a pleasure to use. It's smooth solid and I suspect it will last a long time. One of the on-line reviewers of the set I saw only had one complaint . . . that this set only included one of these. Well, since it seems like an almost thown-in bonus part, I'm just pleased to get one. Having this part, and all of the matched 1/4" hex shank adapters means this set is well worth the asking price, although I would recommend hunting around for a good price. I suspect, although I'm not certain, that my wife probably paid less than $50 for the set. At that price, and with this included chuck, it was a steal. 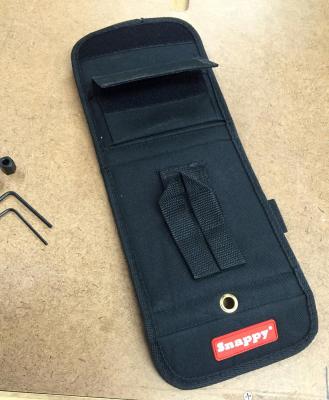 Nylon Carry Case -- This is the one downside of the whole set. It's obviously designed to function primarily as a field-carry case. It's supposed to fold over and allow you to put it in a tool box or possibly on a tool belt. It does also have the option to hang it from a strap, which is what I've done, hanging it on a nail in my shop. Using it that way is fine, although you have to be sure to hang on to the case while trying to remove bits from their holders. The elastic is quick tight and if you try to yank a part out without holding the case, the whole thing will go flying. But the big downside of this case is that in the folded state, it doesn't seem to hold the included pieces well. I tried to fold it over just to see how it would work and I noticed that the sharp edges of the drill bits start clanking into the sharp edges of the countersink bits, AND more damning, the bits of the countersinks are too long for the case. Folding it over, you'd almost have to break the longer bits to get it closed. And certainly, doing that over and over, you'd end up with broken bits on the countersinks in a very short time. Honestly, the case is not that important. I think I'll throw it out and build a mounting block for these parts inside my wall-hang tool cabinet. It's odd how, given how well done the rest of this set is that the case seems to be so mis-sized for the included parts.

Overall, as I said at the top, this is a really good quality set and worth the money. It provides one of the key things I wanted, a set of straight-bit drill bits with countersinks, which I expected would cost $30 on their own, and adds much value with the adapters, collets, chuck and driver bits. All of those extras certainly make it worth the price, perhaps not quite the "market price plus 15%" standard pricing at WoodCraft, but close. And if I ever do shop at WoodCraft these days, it provides my one absolute, set-in-stone, hard core pre-requisite for purchases there, it's a Made in America tool. Mark my words though, if it sells well, WoodCraft will copy the design and ask some Chinese manufacturer to make it, at slightly lower quality, so they can brand and sell it as a 'Wood River' tool, if they haven't already done so.