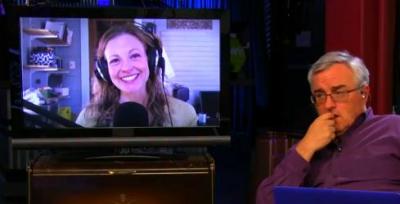 Leo Laporte's TWIT network has a show where they interview notable and interesting people from, well, it seems wherever they can GET them. I suspect they have some trouble with their 'gets' as they call them in the broadcast business. Outside of their little bubble of fanbase, not many people know who the hell they are. Which sort of explains this past week's Triangulation interview with Dr Kirsten Sanford. Now Dr. Kiki is certainly notable, at least in my estimation, because she's one of only five or six serious science popularizers out there in American culture right now.  NOT tech journalists, but SCIENCE journalists . . . someone who knows what it is to work as a scientist and yet can talk to a general audience in a way we can all understand.

We have Bill Nye, Dr. Kiki, Dr. Neil deGrasse Tyson, and who else? Perhaps Laurence Krauss, who I notice mostly because he was briefly associated with my undergraduate alma mater, Case Western Reserve Univerisity in Cleveland. But Dr Krauss is mostly a dick.* There are a couple of people who particularly talk about space science occasionally, like Elon Musk (when it involves SpaceX), Peter Diamandis, when it comes to private industry space, and Miles O'Brien.  There is a very small cadre of people that the media calls upon when serious science topics need to be discussed. Now, Dr. Kiki, despite her long running This Week in Science (TWIS) web and radio show, is small potatoes compared to the others. She was starting to get a higher profile, being noticed in more places and getting called upon more to speak out about such things thanks to the decision by Leo Laporte to carry the TWIS show on his TWIT network.   But then, in mid 2012, This Week in Science was kicked off of TWIT.   According to a message shared by Dr. Sanford on her TWIS website, it was because the TWIT CEO, Lisa Kentzell, declared that the network was 'reorganizing' and would no longer carry other people's shows.  Just to set the scene, Ms. Kentzell is also Mr. Laporte's girlfriend.  This move came as a shock to me and many other people who watch TWIT shows and who liked Dr. Kiki's work there, especially since she had been used more and more to pick up coverage for other shows, such as MacBreak Weekly coverage of tech shows, among other things. 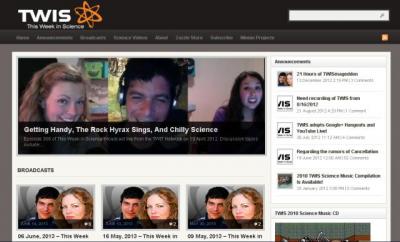 The Triangulation interview was nice and cordial, and it did go into the good Doctor's history and research interests. Dr Kiki was particulalry eloquent about her desire to promote the teaching of the scientific method in our schools. But Leo very carefully did not discuss why, although he 'loves' her, the TWIS show was canned on the TWIT network.  This Week in Science survives, of course, as its own production. It was created long before TWIT was started, and I suspect it may well live long after TWIT goes the way of a divorce court. But TWIS got a big boost of exposure from being on the network.  Yet they did not discuss this rather gigantic elephant in the room.

There is a growing crisis in academics in this country. And I'm not talking about teaching reading and writing to school kids. There is a crisis in the United States graduate school and post doc systems. There is almost no money for 'pure research' in our culture anymore, nor to support the professors who work in less commercial areas. When I was an undergrad, I briefly considered going on for an astrophysics degree. My advisor, a wonderful Astronomy professor named Dr. Peter Pesch at CWRU said that it would be difficult to have a career but to go for it.  About 10 years later, when I was taking courses in English Lit in Florida, I briefly considered going on for a PhD in English to teach and study, but my advisor told me I was nuts to consider it. There were NO JOBS.  And it has gotten worse since then.  When I was a kid, it was considered a bit odd to consider becoming a professor, but it was still done, even in areas that weren't 'commercial'. But since then, the entire culture has grown to worship 'the free market' and 'capitalism' to the point where anything smacking of altruism (or in their view, naive irresponsible self-involvement) has become frowned upon. We no longer support the idea of college professors. The right wing demonizes them as 'liberal commies in their ivory towers'. mostly because the radical right doesn't like skeptical thought. It goes against their mantra, which is really, at its core, "Sit down, shut up, and stop thinking so much."

I know, I know, the TWIT/TWIS relationship has nothing to do with right-left politics. Sorry, just letting my own frustrations at the ongoing War on Science show.

What really irks me, though, is when people who supposedly do support the sciences and technology and the free dissemination of information, go out of their way to get rid of their science reporters because it evidently doesn't earn enough money. Edward R Murrow would be all over this. Alfred E Newman would be 'mad as hell'.  Miles O'Brien was an intelligent and thoughtful reporter about NASA,, space exploration, and science topics on CNN for many years. Then they fired him.  And Leo and the TWIT network stopped supporting Dr. Kiki and This Week in Science . . . because . . . why?  I suspect it may have something to do with the personal preferences of the TWIT CEO. Her relationship with Mr. Laporte is a bit chummy and she does seem to have a large influence over his professional decision-making.  (cough . . ."Yoko")    It's just a shame.

There are some positive signs, but they are in the margins. Dr Sanford did host a Google+ Communication session with Al Gore and others last week. And Miles O'Brien does report for PBS and others on science matters (perhaps until the Republican-caused sequester budget cuts force more layoffs at PBS.)  And the Kickstarter-like campaigns where private citizens can kick in money to support scientific research is an interesting approach.  But it just highlights that we as a culture are abdicating our duty to support the academics of the world who have brought the world to its current advanced state.  We should be supporting them more, with money through our government, and with time on our PUBLIC airwaves to talk about scientific topics, and with time on our private networks to share whats going on in the scientific world that will likely turn into technology in the near future.

*  I hate to conclude how abrasive and offputting Dr. Krauss can be, because I ultimately agree with him on most issues. I even agree that he seemed to have been justified in forcing out the President of CWRU. He's just a poor advocate for scientific outreach because he tends to put his foot in his mouth too often.