Built and fit the sixth drawer to the case on Sunday. My chisels and block plane are getting dull, so I've pulled out the water stones and am about halfway through sharpening them. I probably should have sharpened the chisels about two drawers ago, but . . . .you know how it goes. 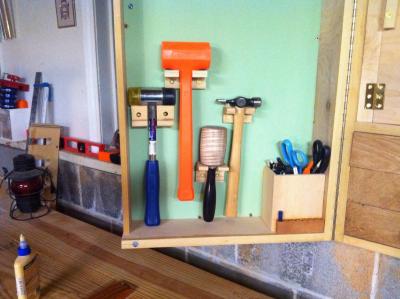 I pushed and finished all four of the 'hammer' mounts last night. This meant mounting the Blue Spruce round mallet and the Warrington hammer (i.e. cross-peen hammer).  I actually took a picture of the finished brackets this time. I sped this whole process up by using the band saw much more. Basically, I took a 3" thick piece of some wood or other from the farm, cut it to width on the bandsaw, figured out where the hole should be for the tool. I used the drill press to cut the holes into the block, but not all of the way through. Then I cut a curve out of the bottom half of the block so I don't have to go through so much material with the mounting screws. This has the secondary effect of opening up the tool holder opening I just drilled in the top of the block.

I have historically been a voracious reader, particularly of novels. But as I've reached my late 40s with young children in the house, I've found that I have little time, or more importantly, mental bandwidth, to read much. What I do read is usually in a very narrow bandwidth of trusted authors and easy-to-digest styles. Until he died, I read Robert Parker's mystery novels. Until the series ended, I read JK Rowling's Harry Potter books. The last trusted source I have right now is LE Modesitt's fantasy fiction. I read it because, a) it's escapist, but b) it's also grown-up fiction. It's fantasy with the concerns and knowledge of a person who has dealt with real world power struggles and real-world politics. I've taken lessons from many of his books on how to operate in a modern corporation, and how to interpret what's actually going on in the divisive politics of 21st century America.

I also occasionally stop by Mr. Modesitt's own personal blog from time to time to see if he's published a take on current events. His is certainly not the only voice I read about such things, but it's a known voice and I often agree with his thinking. Or it makes me think a bit differently about it.  Recently, he wrote about a dance recital that he and his wife attended, and at which he was given a poetry magazine. His take on both the dance and the poetry is that both forms have gotten looser over the past 50 years, and it hasn't been good for either. I don't disagree.

This started me thinking.

In the last couple of days, I've managed to sneak in some time to build a couple more tool fixtures for my wall hanging tool cabinet. I haven't grabbed any photos of it yet. I'll take one as soon as I get all four of my primary woodworking hammers mounted. So far, I have my el cheapo rubber tipped hammer mounted in a bracket at the bottom of the left door. I use that one for horsing out mortises and with my cheaper chisels for taking out the waste from around dovetails. And I also have a bracket installed for my bright orange dead-blow hammer.  I still have the Blue Spruce wooden round mallet to mount, and my Warrington hammer. They're all going to be tightly packed near the bottom of the inside of the left door.

Liam and I took his track, his pinewood derby car, the timer, and a display board to the annual Science Expo at his elementary school this past Thursday. This wasn't a judged event; it's just to give the grade 1 through 5 kids the experience of doing a science display or experiment. 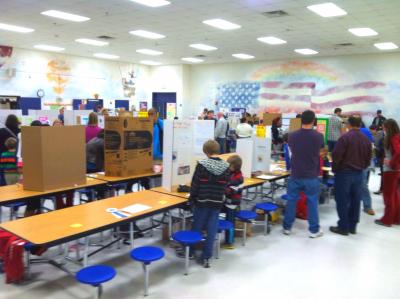 I have lots of pet peeves about people using words wrong. But I know many people are just annoyed by people pointing out such things, so I almost always keep it to myself. Plus, you always risk having your own typos and foibles pointed out in response. But this morning, I happened across an example of one of my most peevishly pet peeves in such a prominent location, by people whose job it is to know better, and I just simply cannot hold it in. 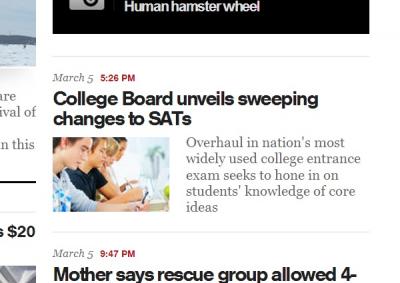 Take a look at this article headline and blurb from the front page of this morning's CBS News website:  "College Board unveils sweeping changes to SATs". That's fine. It's the blurb beneath that is the problem.

I've heard this over and over in recent years in conversation, and more and more in print. And here we have it, in a story about educational standards, no less, on the front page of one of the big network news agencies. HONE and HOME cannot be used interchangeably!