For the teabox, I laid out a basic step-style tansu cabinet layout, with 10 drawers and two doors, and space at the top right where I can put a couple of steeping tea cups.

So the dimensions I started with to determine what size to make the teabox were the two Adagio tea infuser mugs, similar to this.  Each of these is about 3 1/2" wide and 5" tall, with the infuser and glass top  in place. I decided to use the top step of the box, on the right side, as a place to store these two mugs. So a 5" step down from the top height.

The overall box height is limited by cabinets in our kitchen. That's 16" of space.

The width needs to fit in with the rest of our counter items. I decided to go a bit wide, so 20". It'll be a focal piece in our kitchen.

In terms of depth, I wanted the drawers to be functional, not bottomless cubbies I couldn't reach the back of. I thought between 5" and 7" deep. So I split the difference and decided on a 6" deep box.

A small counter-top box, inspired by Matt Kenney's 52 Boxes in 52 Weeks project, and my appreciation for Japanese Tansu chests.  Intended to store loose leaf tea and the tools and vessels used to make it.

I've been wanting to build a small project again, but something nice. Something with some challenging joinery and some nice wood. But not too large.

I was inspired by Matt Kenney's "52 Boxes in 52 Weeks" project. I happened across it during a podcast, I think. Probably the Fine Woodworking podcast, and in one of those rare instances where I was motivated enough by a podcast discussion to actually open a browser and *type in a search phrase*, I found Kenney's MEK Woodworking website. Not only did I like the boxes, but I love the web design.

A couple of the boxes later in the year are naturally tansu-like. Since the author also seemed to be interested during that same year in learning about Kumiko, or the art of wood screen making, several boxes have kumiko added as design elements. Box 2, Box 39, Box 45, and Box 51 all spoke to me on an id-type level. While thinking about the need to build a tea box for our kitchen, I remembered boxes 45 and 51, in particular. Those became the design inspiration for my latest project.

I drink tea. I don't drink coffee. At this place, in this time, announcing a preference for tea over coffee has the impact of making me as appealing to be around as a leper in the Bible. All I'd have to do is mention that I can't stand the NFL, and my favorite flavor of ice cream is vanilla to have the majority of my fellow Americans shun me and shame me. Mostly, though, they just look at me in vague disgust and confusion. Like trying to understand a sea cucumber. Anyway . . . I like tea. And in fact, I like serious tea. You know, the kind you brew loose leaf in a steeping tea pot or an infuser. And I've got lots of different teas . . . in glass jars and pouches and metal containers in our pantry. I need someplace to put the tea, and the paraphernalia. It's a weakness . . . thank you Adagio, you marketing maestros. 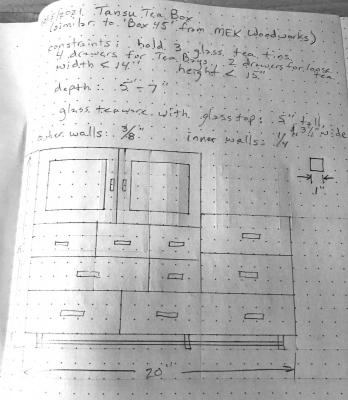 I started by measuring my favorite Adagio steaping tea cups, and the glass jars I use to store my favorite teas in. And I built around that, as well as the dimensions available on our kitchen counter top. It had be less than 15 inches tall, and not too deep, so it wouldn't take over too much of our counter space. I'll put it into Sketchup eventually, but I started out with a simple gridded sketch pad I was gifted last year and drew what I had in mind.

Over the next few weeks, this is what I'm going to work on. My goal with this is to finish it fairly quickly. I'm over the multi-year projects.