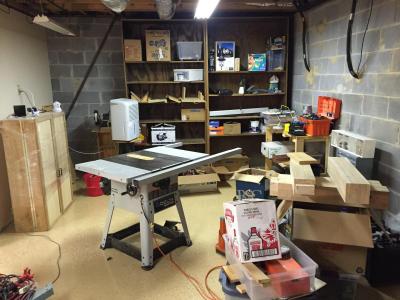 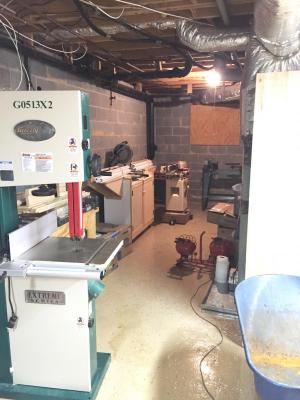 These pictures are from about a month ago. I have made a few small advances since then. I've installed a French cleat on the south wall and hung up my big tool cabinet, and unpacked my good tools into it. That was nice. I finally got my band saw and planer put back onto their rolling bases. I managed to get most of the non-woodworking related boxes out of the room. (That's a huge win compared to my last shop.)

Overall, the shop will be a bit cramped, but I should have workspace for most of the things I want to do. Now that I've gotten past the big unpacking in the rest of the house, I can concentrate on setting things up down here and hopefully making some sawdust soon. (Speaking of which . . . no dust handling system yet.)

Here's what I've accomplished so far:

That's about it, so far. I have some challenges for the next steps: 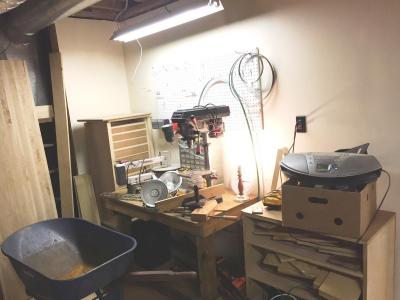 Along the south wall in the West end of the shop, you can see the pegboard and small bench I inherited, and my long-suffering big projects (still unfinished after all these years.) The workbench top leaning up against the wall near the furnace, and my wife's cabinet stuck in the corner, still awaiting it's doors. Soon, hopefully.

I hope to post more often now as the Fall and Winter come along. Each weekend, and now even on weekday nights, I'm starting to get some momentum back. I even have some visions to add to my project list . . things that will fit in the new house. And maybe now I can actually start finishing some things. 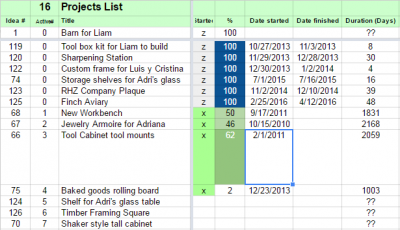 You want to see a secret? I'm going to share what my project list actually looks like right now. I keep it in a Google Docs spreadsheet. I have to. I spend so much time on these projects I would have forgotten what the heck I was working on it I didn't store it somewhere. Anyway, here's my current 'top 10 list' of projects just completed, to be finished, and to hopefully start: