Since we're going to be moving again next Summer, although I've done some work to set up my shop, I've decided not to go overboard on that. Another shop in the basement means hauling tools up and down stairs or a very steep hill to the back door. And anything I set up in terms of tools storage or wiring will only be useful for another few months. 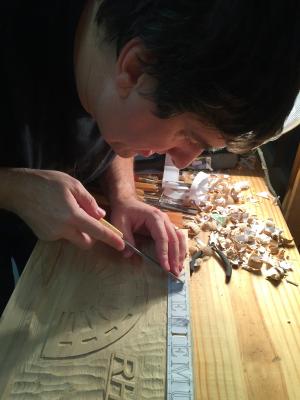 Still, I have wanted to do something in the shop. I've been watching a few of the Chris Pye carving tutorial videos, along with a couple of very nice videos on Youtube of Spirit Williams. I can use my little jury-rigged bench with a veritas bench dog to hold a small piece. So right before Thanksgiving, I decided that I would try my first real piece of relief carving. And I was going to use material that I had on hand. This presents a challenge, since the only wood I have that's close to large enough (I wanted something at least 10" wide by about 2' long) is either some maple . . . or some maple. That's what I have . . . maple. And maple, even the 'soft' kind is damned hard for carving. Still, I'm a stubborn guy. I was determined to try.

I found a piece a bit over 11" wide and just long enough for what I had in mind. (It was an offcut of one of the boards I've used for the silver maple workbench.) Then I created a design in CorelDraw using the RHZ services logo. I wanted something where I could carve a motto for them around the edge. Since this is my first 'production' carving work, I didn't want to bite off too much of a carving task, so I opted for a simple relief in the middle, just lowering the background from the logo and letters of the company name and establishment date, with a motto cut in Roman style around the edges.

I started cutting the board, flattened it with a handplane, and attached the paper design to the face right after Thanksgiving. I attached it with a spray adhesive used by artists and also for attaching photos to mattes. That turned out to be a bit of a problem because, well, it stuck a bit too well in some places. I ended up having to cut the paper off of the board, very carefully, especially over the raised letters. I used a v-tool to cut around the inside of the rounded rectangle of the background, around the logo, and in big rectangles around the two pieces of raised text. That latter decision was something I would not do again. I should have just gone ahead and used the v-tool up close around the letters themselves, rather than making the rectangle around the words. It took some work to adjust the background not to show that I had made those intermediate cuts. After lowering the background by only about 1/8" to 1/4" (maple is HARD, remember) using a 20mm number 3 gouge and the mallet, I then started work on detailing the edges of the raised names of 'RHZ Services' and the 'EST 2006' text. Those turned out to be the trickiest part of the whole project, as that text was taken straight from the company logo. It's not particulalry designed for woodcarving. I had a few places where raised serifs and fine details were very hard not to break off. I ended up reinforcing a couple of those weak points with CA glue on the capital E and the period in 'EST.' 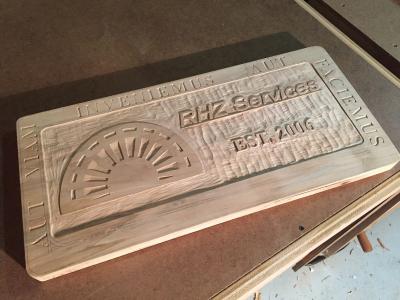 After getting the raised lettering and logo finished mostly to my liking, I then attacked the incised motto. I had done some practice cutting of such lettering a year or two back, but in much softer woods, poplar and basswood. It took considerably more force and determination to cut similarly clean lines in the maple.  And of course, at this point, I only had about two days to finish the project before I needed to wrap it as a gift and ship it to my sister and brother-in-law in Ohio. I cut the entire motto, and cleaned up all of the lines in only three marathon sessions after work on the 15th through the 17th of December.

I finished clean up carving, cutting the board to length, and rounding the corners at 2am on the night of the 17th (I guess, actually, it was the morning of the 18th.) 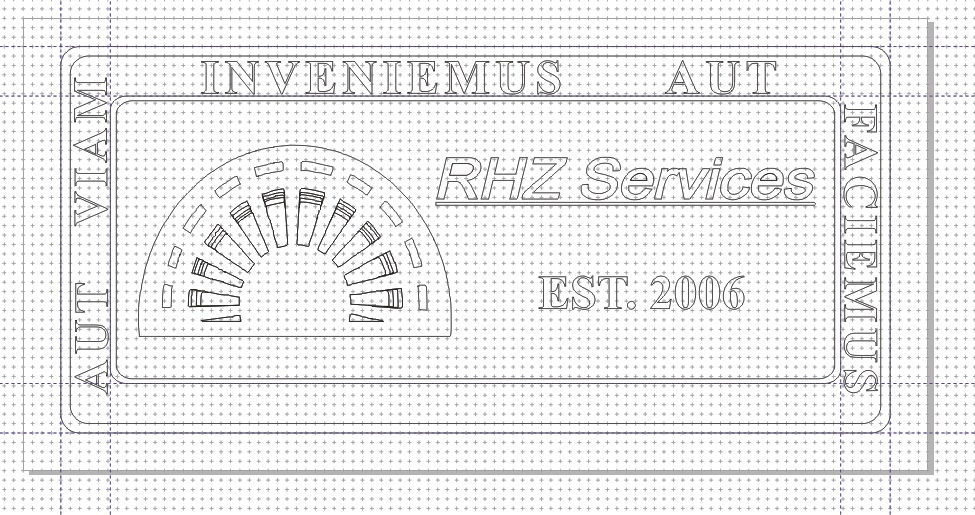