These are posts about trees, both specifically and about dendrology and silvology in general. I'm a tree-hugger. Deal with it. 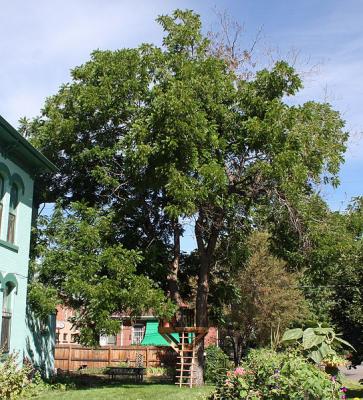 I tend to follow the news about North American diseases of trees ever since I got interested in the case of the American Chestnut back in the 90s. I'm a casual, interested observer. I had heard about the disease that was impacting the Black Walnut trees west of the Rocky Mountains in the early 2000s.  It seems that the trees, which originally came from the eastern forests of the U.S., had no natural immunity to the local flea-sized pest, the twig beatle, or more importantly, to the fungus that this little beatle carries from tree to tree.

It's depressing to realize how little knowledge, particularly in treatments, we have of tree diseases. Right now, tree disease or insect infestations are devastating the global populations of black walnut trees, elms, ash trees, butternut, Japanese larch, some European oak trees, and many others. The only defense proposed by the foresters in the United States to the walnut disease, otherwise known as Thousand Cankers Disease,  is to attempt to quarantine the infected black walnut populations of the west coast, to keep it away from the valuable and widespread Walnut groves in the Eastern United States.

Al Jazeera story about the possible impact of Thousand Cankers on the U.S. Black Walnut industry

I hadn't heard until today, that the disease has already made the jump. It evidently popped up in Tennessee as early as 2010. But as with all things tree related, movement is slow. Even verification is slow. And in late 2012, the disease was also detected in Butler County in my own native state of Ohio. This is horrible news. The black walnut tree population, so valued by woodworkers in North America may be doomed. And this is probably the nail-in-the-coffin for the butternuts, who were already devastated by their own special disease in earlier decades. The disease seems to be close to 100% fatal to the juglans nigra (Black walnut) species. 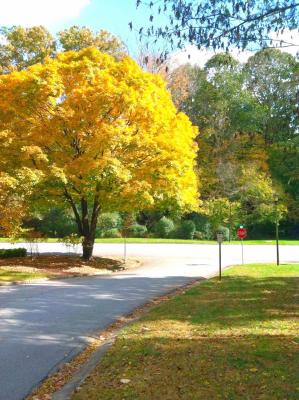 Living in Martin's Landing here North of Atlanta, we are surrounded by a wonderful southern deciduous forest. This has been the best part about moving up from Florida last year.  Last Fall, the autumn leaves came and went so quickly . . . I believe we had a dramatic windstorm right after the full colors came on, and it stripped most of the leaves off the trees within a couple of days. Still, I had time last year to notice that the maple at the end of our street is a stunning golden color that is gorgeous for a couple of weeks in the Fall. This past weekend, I actually walked down the street just to snap a couple of pictures of it.

Fall is my favorite time of the year. And as is required of our overly sardonic age, I'm now hearing people bemoaning all of the worship of the beauty of this time of year. It's been done too much, you see. Or so I hear from the hipsters. My attitude about that is quite simple . . . bollocks.  Fall *is* the best time of the year. The blustery winds, the cooling weather, the falling leaves, smells and tastes of the harvest season, the return of the holidays, the joy of learning a new thing as school starts again, the scudding clouds in front of a gorgeous full moon on a chilly night walk down a street sidewalk strewn with crunchy multi-colored leaves, all smelling of freshness and wet oak.

There was an interesting crossover to woodworking in the latest Alton Brown podcast.  Yes, I like Alton Brown; he cooks, he's funny, and he's a geek. Don't give me any shit about it. I get enough on the topic from my wife. She can't stand him, for some reason.  So the Alton Browncast is normally about cooking and food related items, but in the last couple of weeks, he's branched out to talk about other topics that interest him. Episode 18 has him doing a 90 minute long interview with the founder of Taylor Guitars, Bob Taylor. It's a fascinating and wide-ranging discussion; they talk about the start of the business, ways to market your work, the production process, and food and diet, among other things. (Bob has just recently become a vegan, for health reaons.) 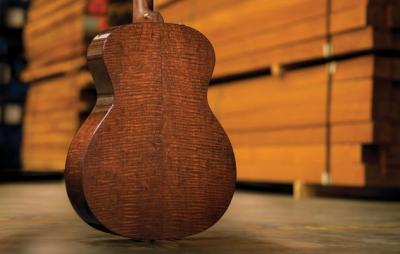 But from my perspective, the most interesting aspect of the interview came in the first half, from about the 20 minute to the 45 minute mark. Due to the recent legal difficulty at Gibson Guitars over improperly sourced exotic woods, it's clear that the entire industry has had to take a new look at their wood supplies. And it sounds as if Bob Taylor has done more than anyone to come up with a new way of suppling their factories with the woods they need.  If anyone is doing yeoman's work at pointing us all in a new sustainability direction in this area, it sounds like Mr Taylor is at the forefront. It's an interesting listen to hear him talk, with passion and thoughtfulness, about travelling around the world to find the finest woods for his production; to Alaska for Sitka spruce, to three small mountain villages in Honduras for rosewood, and to Camaroon for ebony.  It's the latter tale that has the most intrugue, and raised the biggest questions for me.

One of the sad reasons that I've been more and more interested in trees is that I've seen first-hand how poorly they are doing. Growing up on a farm in Ohio, we had a woods on our pastures. Now cattle pastures are not the most healthy place for groves of trees, because with the relatively high density of animals on a restricted piece of land, they tend to graze the entire plot extensively, and farmers tend to mow or brush hog to promote grass growth. All of these things mean that on a cattle pasture, there are often no saplings, except at the margins and just beyond the fencelines.  My father was better than most, in that we had a fairly large pasture for the herd population, and it had a well established grove of trees, particularly of dogwoods, maples, pignut hickory, shagbark hickory, mockernut hickory, butternut, ash, oak, walnut, and beech.

But over the years since my early childhood, I've seen populations of trees sicken and die. The old Elms that were left when I was a boy died off from Dutch Elm disease early on. Since then I've seen the ashes succumb to Emerald Ash borers (including one in our front yard), and the few butternuts die from their own blight.

There are things happening in dendrology right now, partially because of altruism (people want to bring back treasured old tree species such as the American Chestnut) but mostly because of economic terror. The entire Walnut industry is scared of the Walnut blight. Landscaping firms have spent alot of time and money trying to save treasured trees on college campuses and the estates of the wealthy.  But we, the general public, can't ignore what is happening. And with the new stresses of global climate change, many species are under attack in ways they may have encountered before, but never with the landscape limitations they now suffer, living in a world dominated by human beings.

It's always strange to me that woodworkers like myself are not usually that concerned about trees. To them, it's only a resource. When a species is under attack, they hear about it and talk about it (if at all), only in the context of how it will change the prices of their favorite lumber.  For ash, the emarald borer infestation has been seen as an opportunity to buy the lumber cheap.  But even I've been astonished at how little attention they've paid to the threat to the black walnut, one of their favorite woods.  I guess trees are too far removed from the business end of woodworker to garner notice.

I refuse to ignore this or be blind about it. I'm tracking stories as I come across them about what is happening in North America around our great forests and the wonderful trees that live there.