As I've mentioned recently, my workshop is a temporary construct. We've moved several times and will move again in the near future. This is the result of our evil banking industry and the fact that when they tanked the world economy, my wife and I were forced to accept a short sale on our Florida home. Rental is never stable, as we found out when our first Atlanta home was needed back by the owner last year. From a shop perspective, that was really too bad, especially since I had invested in a pair of 30Amp circuits in the basement shop in my las rental property. (You're welcome, Mr Landlord.) But the additional burden of moving a shop is that things just get lost.  I still haven't located my random-orbital sander. 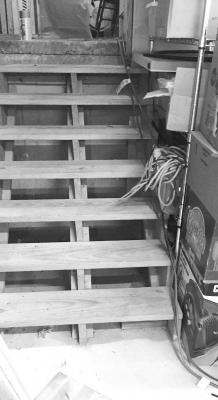 But lately, it's been getting even worse. The wiring in this house is absolutely horrendous when it comes to supporting a woodshop. The entire lower level, including our garage and my workshop, are on a single 20Amp circuit. That was bad enough, but then some time during the winter, that circuit just . . stopped. It hasn't tripped a breaker. I can't find a single problem wrong with it, other than the fact that there is no juice at the outlets or lights on the circuit. And since I'm moving soon, I refuse to invest the time and energy into tracking down the problem. Especially since we've reported a ton of fix requests with the renting company. I fear we're getting a reputation.

So, to get anything done, I had to improvise. I ended up running a thick-as-heck (12 AWG, I think) extension cord from one of the upstairs outlets down to the shop. That has been just good enough for me to do things like running the table saw and benchtop planer. Then I have another extension cord that's coming from an outlet just outside the back door to handle lighter loads, like drills and the shopvac. Great googly-moogly, I am going to LOVE having my own shop again.  Plus, the rat's nest of extension cords running around the shop are just not terribly safe. I mean I unplug everything at the end of each session, and I'm very careful when walking around right now, since I know this tangle is an accident waiting to happen. But I'm just making due long enough to get outta here.

And my wife doesn't understand why I'm so desperate for us to buy our own property. (sigh)