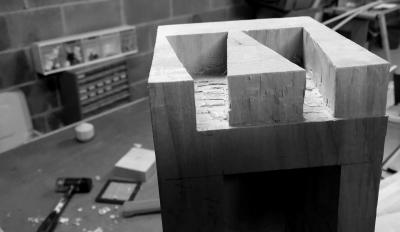 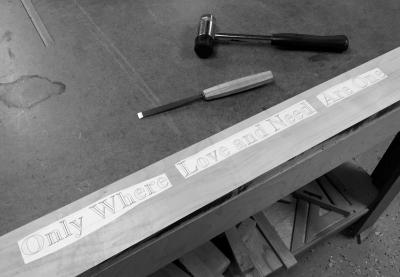 In any case, I needed mostly No 4, 5, 6 and 9 sweeps for these letters. The number 4 Fishtail gouge was especially helpful. The second set of cuts were the angled cuts into each serif.  I worked from left to right. It was unfortunate that the phrase starts with the letter 'O', since it's about the trickiest one to get right. It needs to be symmetrical both vertically and horizontally, and minor screwups can look fairly major on this letter. I, of course, to get back into things, started out with the lower case 'L' of 'Only'. Nice, straight edges.  There, that wasn't so bad. Then I got overconfident and went after the 'O'. Not great, but acceptable. 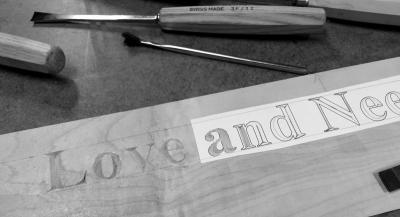 Finishing 'Only' was a trial. It was getting back into carving in a hard wood, but at least I'm used to it. The last big sign I did was for my Sister and her husband and their Oxydizer Servicing company. That was a trial by fire. This was just getting back into the ring with an old nemesis.

It took me a couple of days to get into it, but after finishing the first half of the message, I was determined to finish it quickly. One more all day session last Saturday, and I got the full thing carved. Each curve got easier with practice.  It's always easier to do this sort of thing cleanly if you work with a raking light, or a bright light attached to the bench, shining at a low angle across the work.

Up next . . . attaching the frontispiece and endcap to the benchtop. I've already started it . . . 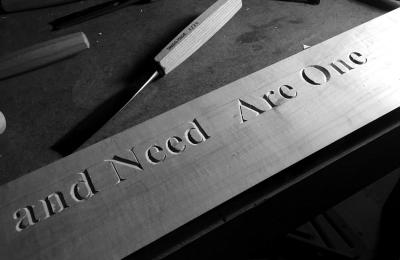 Altogether, it took me about  three hours to complete the carving. I finished the first word in about an hour, and the last five took an hour.