I've had a project on my wish list for about 10 years now . . . to replicate the rolling board, or baking board, that my mother used when making Christmas pastries. Hers was made by her father, George. We kids called him Jeje. (My sister spells it Djedje . . . whatever, it's just Slovak for Grandpa.)  My sister Holly has the one my Mom used, which is appropriate. She lives at the farm, and she bakes more than I do. 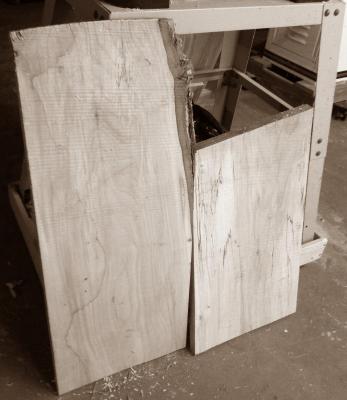 But I've often wanted one of those big, wide, flat boards with a lip on the front like they used in Europe. It makes rolling out pastry dough so much easier. The one Holly has is, I believe, a single, wide piece of something clear, fairly light, and even grained . . . maybe beech?

I've got pieces of wide, even-grained, slightly spalted maple from the tree we cut down in the front of the farm house several years ago. So I'm going to make one. My goal was to make it in time to use it for Christmas baking 2013. Well . . THAT didn't happen. But still, I've gotten started enough that now I consider it a going enterprise. So I have to track it. So far, I've picked out two boards to function. I don't have anything wide enough to do it in one piece, but I think it'll do as long as I spring the joint just slightly. (Definitely no biscuits in this one. The slightest deformation of the surface reads in the dough. I don't want no buscuit shaped indents in my biscuits when and if I ever decide to make biscuits (the baked kind). . . . Falling into the making of biscuits is always a risk here. This is, after all, the South, and Alton Brown lives not 20 miles from here.)

That's where this sits now.  Two boards picked out. I could finish this one in about 2 hours. Maybe I'll slip it in in between dovetails on my wife's cabinet build. (Shhhhhhhhh. Don't tell her.)

Not much detail, and I don't have any photos of this one, but I have made a small bit of progress in between other... more...